From Caves of Qud Wiki
Jump to navigation Jump to search
This information is reliable as of patch 2.0.201.46. If this is no longer the current patch, you can help by updating it.
Stinger (Poisoning Venom) 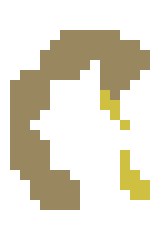 You bear a tail with a stinger that delivers poisonous venom to your enemies.

(level based))
Stinger is a long blade and can only penetrate once.
Always sting on charge or lunge.
Stinger applies venom on damage (only 20% chance if Stinger is your primary weapon).
May use Sting activated ability to strike with your stinger and automatically hit and penetrate.
Sting cooldown: 25
Venom poisons opponents for 8-12 rounds (damage increment (level based))
+200 reputation with arachnids

Note that for easier wiki use, ID has its Class constructor appended to it. The ingame ID is Stinger with constructor="Poison".

stinger that delivers poisoning venom on a successful attack.

When venom is applied, the target will become poisoned for 8-12 rounds, taking a damage increment determined by mutation level every turn until the effect wears off. Poison additionally halts natural healing, halves the effectiveness of healing items, and inflicts the Ill status once the effect is over. The target has a chance to make a Toughness save against the poison, with the difficulty being based on mutation level. If this is successful, the target will "resist" the poison. Non-biological creatures, such as robots, cannot be poisoned.

The following formulas are used to determine penetration (rounded down), poison damage increment, and save difficulty against poison based on mutation level. Note that penetration cannot exceed →13.

If the mutation level is less than 2, penetration is →7. Additionally, damage is not determined by a formula and instead is determined by meeting certain level thresholds.