From Caves of Qud Wiki
Jump to navigation Jump to search
This information is reliable as of patch 2.0.201.44. If this is no longer the current patch, you can help by updating it.
Slime Glands 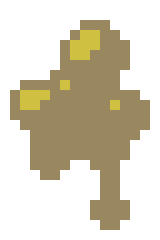 You produce a viscous slime that you can spit at things.

Covers an area with slime
Range: 8
Area: 3x3
Cooldown: 40 rounds
You can walk over slime without slipping.

slime into a targeted 3x3 area. For each of the cells in that area, there is an 80% chance of creating a pool of 500 drams of slime. This mutation also grants Slimewalking.[1]

Slime Glands costs one mutation point at character creation and, like all 1-point mutations, cannot be leveled-up.

Slime Glands can be taught by a Legendary ooze such as k-Goninon to any player, even True Kin or espers.