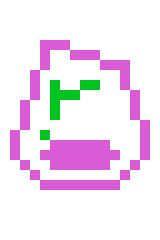 Geometry is stressed under the gelatin alp, which erupts from the smooth planes of its surroundings in disgusting triumph of size. Its k membranous faces, once taut by the pressurization of symmetry, now follow a sagging curve toward the wet core, and through the blurry placentae shines a museum of historical objects from across the numbered ages. Are those the bones of a pig? Is that a bronze bell? Inside the bright-slick sac, earth-remnants from across time are joined to one space, and k-Goninon sloshes in hunger.

k-Goninon is a legendary creature belonging to the oozes faction. It resides in the the

Tomb of the Eaters.

k-Goninon can be found in a random location in the Folk Catacombs, and will attack the player if it encounters them, unless the player has positive reputation with the oozes faction. It is integral to the Fraying Favorites quest.

Agyra as an "ancient and venerated

gelatinous cupola". Ey state that k-Goninon has lived in the Tomb of the Eaters for "centuries" and that it obtained the Mark of Death by "consuming" it, allowing it to avoid the ire of the

repulsive device from em. k-Goninon's description and Agyra's dialogue seem to imply that it is extremely large due to its consumption of various items and individuals across time, and that it does so due to its "hunger".

k-Goninon is involved in the side-quest Fraying Favorites, granted by Agyra, a member of the mopango living in the Folk Catacombs. The quest tasks the player with retrieving the repulsive device from k-Goninon, who will be in a random location somewhere within the Folk Catacombs. The player can do so either by killing k-Goninon, or by pacifying it and trading with it, among other methods.

k-Goninon will usually begin hostile to the player due to the player's starting reputation of -550 with the oozes faction, and thus will attack them on sight. It is possible to pacify k-Goninon by raising one's reputation with oozes, however.

k-Goninon's mainly attacks by approaching the player and attempting to engulf them when it is within an adjacent tile. When engulfing the player, k-Goninon will inhabit the same tile as them, and will remain completely stationary. The player will suffer

6-9 damage every round[1][2] and will be unable to move; attempting to move will instead cause the player to perform a melee attack against k-Goninon. Additionally, the player will be unable to perform certain physical actions, such as Charge, Juke, and Jump.[3] The player cannot be attacked by other creatures while being engulfed, and any attempting to do so will instead target k-Goninon.

When k-Goninon engulfs a creature, a timer is started that begins at 10 and decrements by 1 each round. When the timer reaches 0, k-Goninon and its victim will "melt through the floor" and forcibly descend one stratum. This creates a

deep shaft in the tile where k-Goninon melted through the floor. There is no limit to how many times this can occur; however, k-Goninon cannot melt through the floor if an obstacle is present in the stratum below, such as a wall or other impassable object.[4]

k-Goninon will continue to engulf the player until either it or the player dies. However, the player can escape being engulfed prematurely through means such as

k-Goninon is unique in that its inventory is completely random every playthrough, and can consist of any item in the game that is eligible for dynamic encounters. k-Goninon can even spawn with items that are normally unobtainable, or objects that normally cannot be carried in the inventory.[5] k-Goninon's inventory will be populated with 10 such items, which may be completely useless to it due to their random nature; however, k-Goninon will utilize any items that it can equip to one of its equipment slots, and thus can be encountered wearing armor and wielding melee, missile, or throwable weapons of any variety.

k-Goninon only has one item in its inventory that is static across playthroughs; the

k-Goninon will always spawn with the Mark of Death. Additionally, it will never be hated by robots.[2]

The player is able to perform the water ritual with k-Goninon if it is non-hostile, using

slime in place of

Slime Glands mutation in exchange for 100 reputation with oozes. This can be done despite any "genetic limitations" the player may have, such as if they are an

Esper or a True Kin.