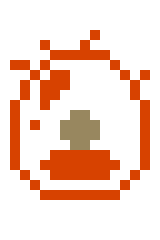 Behind the glass membrane, inside a microcosmic globe, heat gives birth to lobes of molten rock that flow toward their own pyroclastic demise.

A red jell is a creature belonging to the oozes faction. It is a tier 7[1] creature, and is thus found deep underground.

Red jells attack in melee with their \magmatic pseudopods, of which they possess 2. Each pseudopod is a cudgel weapon that deals

20-3020-30 (Avg: 25) "fire" damage, which is protected against by heat resistance. The magmatic pseudopods also have a +6 to-hit bonus, and a →penetration value that depends on the particular red jell's Strength modifier. Besides these, red jells possess 2 other "pseudopods", which are equivalent to bare \fists.[2]

When a red jell hits a creature with one of their magmatic pseudopods, the creature's temperature will be forcibly raised by 350-400350-400 (Avg: 375)° T.[3][2] There is no cooldown on this ability, and no limit to how many times it can occur. High temperatures can cause creatures to catch on fire, and will eventually vaporize them if a high enough temperature is reached.

Red jells naturally and constantly emit light in a circular area around themselves. This area has a radius of 6 tiles in every direction.[4]

When a red jell dies, it explodes into several pools of

lava. Each tile adjacent to the red jell, including the tile it was occupying, will have an 80% chance of being filled with a pool, with each pool having a volume of 500 drams.[5]

Being oozes, red jells lack a mind and thus are immune to abilities and effects that target the mind of a creature, such as Sunder Mind.[6] Additionally, red jells cannot slip on slippery liquids such as

slime, cannot become stuck in sticky liquids such as

asphalt, and cannot be knocked prone.[7] Unique among oozes, red jells bleed lava instead of slime.[2]

This information is reliable as of patch 2.0.201.70.
Retrieved from "https://wiki.cavesofqud.com/index.php?title=Red_jell&oldid=84488"
Categories: