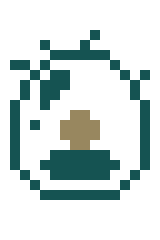 This animate sac of black ooze rolls along the floor. Through the thin membrane that keeps it from spilling out of itself you spot a shoal of eels swimming about.

A black jell is a creature belonging to the oozes faction. It can be found in

Black jells attack in melee with their \oozing pseudopod, a cudgel weapon that deals

2d22-4 (Avg: 3) damage, and has a →penetration value that depends on the particular black jell's Strength modifier. Black jells also possess 3 other "pseudopods", which are equivalent to bare \fists.[1]

When a black jell hits a creature with their oozing pseudopod, the creature is forced to make a Toughness save of difficulty 25. If they fail, they will be inflicted with the onset stage of either ironshank or glotrot. Which disease they contract depends on their current Z-level; if the Z-level is an even number, they will contract ironshank, and if odd, they will contract glotrot.[2]

When a black jell dies, it explodes into several pools of

Being oozes, black jells lack a mind and thus are immune to abilities and effects that target the mind of a creature, such as Sunder Mind.[4] Additionally, black jells cannot slip on slippery liquids such as

This information is reliable as of patch 2.0.201.70.
Retrieved from "https://wiki.cavesofqud.com/index.php?title=Black_jell&oldid=84476"
Categories: