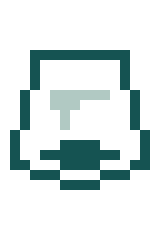 Organic matter is liquefied by the agents of decay and pressurized by tight spaces into the shapes of prismatoids. Galvanized by a cousin-instinct to hunger, the gelatin entity now extrudes itself forward in antiprism form.

A gelatinous antiprism is a tier 7 creature belonging to the oozes faction. It is typically found very deep underground.

Gelatinous antiprisms attack by moving close to their target and engulfing them when the antiprism is within an adjacent tile. While engulfing a target, an antiprism will inhabit the same tile as the creature it is engulfing, and will remain completely stationary.[1] Engulfed creatures will suffer

4-8 damage every round[2][3] and will be unable to move; attempting to move will instead cause the creature to perform a melee attack against the antiprism. Additionally, the creature will be unable to perform certain physical actions, such as Charge, Juke, and Jump.[4] Creatures who are being engulfed by a gelatinous antiprism cannot be attacked by other creatures, and any attempting to do so will instead target the gelatinous antiprism.

A gelatinous antiprism will continue to engulf its target until either it or its victim dies. However, the victim can escape being engulfed prematurely through means such as Teleportation or becoming out-of-phase.

When a gelatinous antiprism engulfs a creature, a timer is started that begins at 10[3] and decrements by 1 every round. When the timer reaches 0, the antiprism will "refract" the creature it is engulfing, creating 2-3 copies of them in random adjacent tiles. This will fail if the gelatinous antiprism is being affected by normality. The clones produced will be aligned with highly entropic beings, will be colored black, will each be named "anti-[creature name]", and will be hostile to the original creature.[5][6] However, they will refrain from attempting to attack the creature until they are no longer engulfed.

After an antiprism has created a group of clones, its timer will reset and the cycle will repeat. There is technically no limit to how many clones an antiprism can create; however, it will not be able to produce any more if it is surrounded on all sides by walls or creatures (including existing clones).