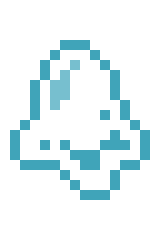 Quickened to life, or something akin to life, by the ionic exchange between an ultra-reactive primordial soup and its liquid cousin, the sludge repeats a process played out on trillions of star-orbiting world-rocks.

A soupy sludge is a low level ooze. They mainly appear in the Rainbow Wood if a liquid interacts with 500 or more drams of

primordial soup. If spawned from primordial soup, the sludge has a special ability to absorb liquids on the ground to rapidly gain level, stats, and status inflicting attacks.[1] Because soupy sludges have no other unique features if they do not spawn from this soup, the rest of this article will assume that the sludge was spawned from it.

Sludges that emerge from the primordial soup will also gain a liquid spitting ability, similar to but not the same as

Slog of the Cloaca's spitting ability. This has a range of 8 tiles and will spit a liquid in a 3x3 area. The liquid has a 20% chance of being the first liquid that the sludge has absorbed (unless it is

sunslag) in which case fresh

water will also be included, making them spit dilute cloning draught or dilute brain brine instead); otherwise, it will be a combination of all absorbed liquids. These liquids are not considered poured and thus do not become salty when spawned unless one of the liquids absorbed was salt.

soupy sludges start with 4 pseudopods, cudgel weapons that do

4d44-16 (Avg: 10) damage and have a +6 to-hit bonus, but can grow more as more liquids are absorbed. Each of a soupy sludge's pseudopods have a 100% chance to attack in melee, meaning it will attack with all of its pseudopods at once when making a melee attack. This, combined with the cudgel's ability to daze, can cause a creature to become stunlocked.

This section is an excerpt from Primordial soup#Forming Soupy Sludges.

In order for primordial soup to form a soupy sludge:

Once these checks are all true, the soup will begin reacting to the secondary liquid. If the second liquid is already a mixture of two other liquids, it will randomly choose which one is the second liquid. In 9 to 149 turns, a soupy sludge will spawn in that cell, and use up 500 drams of the liquid in that cell. The soupy sludge will be equipped with a pseudopod related to the secondary liquid the soup reacted with. This repeats until one of the above conditions stop becoming true, in which the soup will stop reacting.

Depending on the number of liquids a sludge has absorbed, the name of the sludge will change. This is in addition to the liquid stained prefixes that the sludge will have. This rename will overwrite custom names if the soupy sludge was renamed. Note that a sludge can only absorb a maximum of 25 liquids: neutron flux and primordial soup are unabsorbable, the former because it explodes if it exists on the ground. Cloning draught cannot be absorbed unless it is the first liquid a sludge has absorbed.

soupy sludges will absorb most liquids that they step into. Being covered in or having liquid poured on them does not let them absorb the liquid. The chosen liquid will be the most abundant type in that liquid volume. If it was already absorbed or the primary liquid is primordial soup or cloning draught, the secondary liquid will be chosen to be absorbed. For each new liquid absorbed:

Lava sludges are soupy sludges that have absorbed lava. They start with a temperature of 1,000T. If they end the turn below their flaming temperature (350T), they will cool into

shale. This counts as instant death.[3]

This information is reliable as of patch 2.0.202.64.
Retrieved from "https://wiki.cavesofqud.com/index.php?title=Soupy_sludge&oldid=76242"
Categories: