Slog of the Cloaca

From Caves of Qud Wiki
Jump to navigation Jump to search
Spoiler Warning: This article contains spoilers regarding

Golgotha. Proceed at your own discretion.
Slog of the Cloaca 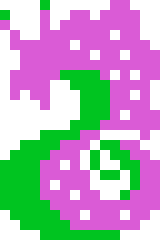 Slog of the Cloaca

The colossal slug known as Slog presides over its fetid domain of the Cloaca. It bathes its bloated, slimy body in moiling pools of dross, keeping itself moist and waiting for fresh prey to be churned into its lair. Whereas nature had the decency to end the body of the common slug in a muscular foot, Slog's tail is instead a sphincter-choked bilge hose that it uses to spew at its prey the filth of the Cloaca.

Slog of the Cloaca, or Slog, is a unique legendary mollusk that resides within the Cloaca of

Golgotha. The player can perform the water ritual with it using one dram of

slime. 50 mollusk reputation can be spent in order to learn the Cloaca Surprise. However, Slog will not teach True Kin.

In combat, Slog has two main weapons: Its \crushing bands and \bilge sphincter.

The first two are physical natural weapons, with the sphincter considered as an off hand weapon with a base 15% chance to strike for

2d22-4 (Avg: 3) damage with a 25% chance of poison. For more information, visit Bilge Sphincter. Slog has very high strength, with +6 added to it from its Bilge Sphincter, so an attack from either will have →15PV.

To close the distance between it and its prey, either the player or the other non-mollusk denizens of Golgotha, Slog has a +50 movement speed boost when standing in liquid deep enough to swim in (1,000 drams before 2.0.200.0, and 200 drams after).

Slog is also able to spew liquid at any target 8 tiles away, including its own tile. The liquid spewed is what Slog is currently undulating on. Spewing splashes a 3x3 area centered around the target, forcing them to make a strength and agility save. If they fail, they will go prone and cause assorted affects depending on the liquid they fall on, which is the liquid that was spewed:

When Slog perishes, it is guaranteed to leave behind its

corpse. This corpse can be butchered into a

Slog does not have very high willpower, with a score of only 16. Slog's high level will make it harder to proselytize since ideally the player character is less than level 18.

It can also be done through reputation, but the level difference makes it an expensive option if it is the character's first trip to Golgotha.

Obtaining the recipe for the Cloaca Surprise from Slog requires +50 reputation with mollusks; since the player starts with -475 reputation, getting the Surprise requires a +525 reputation gain over the course of the game. Thankfully, the existence of the

electric snail shell and the snail-encrusted item mod make this much easier than a standard faction. Snail shells provide +200 reputation and are easily obtainable by butchering

electric snails, and the snail-encrusted item mod provides +250 reputation. If the player character has Two-headed, two shells make +400 reputation, bringing mollusk reputation to neutral (-75 rep) if unchanged from the starting reputation. The player can then water ritual Slog and give it secrets it is interested in.

If the player character has Tactful, the initial +125 bonus from the water ritual will automatically be enough for the player to ask for the Cloaca Surprise recipe. Otherwise, player characters must keep an eye out for secrets that mollusks are interested in and sultan history that involves mollusks.