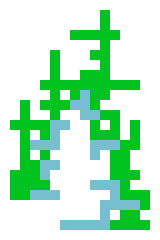 Shrouded in the rotting jungle are the mouths of the rust-caves of Golgotha, chrome's graveyard.

Golgotha is an early game dungeon that the player is sent to as part of the first quest for the Barathrumites, "More Than a Willing Spirit." The structure only occupies the center zone of the parasangAn area made of 3x3 screens, which is represented as one tile on the overworld map.; outskirts both above and underground generate as normal

Spoiler Warning: This article contains information normally only found in the course of advancing the main quest line. 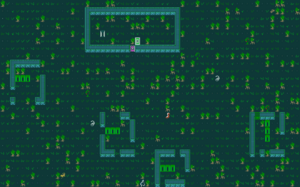 An example of the surface level layout of Golgotha.

The outside of Golgotha appears as a jungle level with one sealed central building and four randomly placed outbuildings, each containing a row of three

deep shaft that leads directly to the bottom of Golgotha, and a

control switch that will unlock the door from inside.

When ready, the player can jump down one of the slimy shafts to the first floor.

One advanced strategy is to

mine your way through the

tarnished chrome directly into the central building, and jump straight down the elevator shaft- but your character cannot survive the fall without special preparation.

An example layout of the first floor of the trash chutes. The conveyor belts will move creatures, items, and liquids along them, delivering them to the next set of

slimy shafts and down to the next level.

The next four floors are all randomly generated in the same way: the player drops in from a shaft in front of a set of

conveyor drive units driving -conveyor belts. The player must then choose how to make their way to the next set of slimy shafts leading down: whether by standing and fighting to clear an area, or potentially by riding the conveyor belt as quickly as possible to the next level while dodging hazards. Whatever strategy is used, the player may have to confront:

An example layout of the Cloaca.

In contrast to the quickly moving conveyor belts and hazards of the trash chutes, the Cloaca is a relatively static area full of

trash and sewage. The player will encounter one rare

chest, a dysfunctional waydroid, and the unique creature

Slog of the Cloaca. Whether Slog is friend or foe depends on the players reputation with Mollusks. Mutants with a good faction relationship can learn the Cloaca Surprise through preforming the water ritual with Slog, using one dram of

slime. Alternatively, Slog can be killed, and their corpse butchered to obtain

Players should come prepared to run the entire dungeon, since floors in Golgotha cannot be ascended by normal means once the run has begun.

Strategies for preparing for Golgotha's hazards may include: