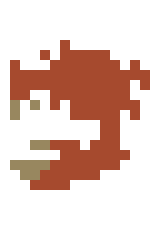 Its shell is the color of air-sucked iron. It waves a monstrous claw in hostility, and blood-crusted rust flakes are shaken free of their serrated home.

A rustacean is a creature belonging to the crabs faction. Rustaceans can be found underground, as well as in the

Rustaceans attack in melee with their \rust-encrusted claws, natural cudgel weapons that each deal

1d31-3 (Avg: 2) damage.[2] To compliment their claws, rustaceans have the Cudgel Proficiency, Offhand Strikes, and Flurry skills, as well as a special NPC only skill, Shattering Blows.[3]

Rustaceans possess two mutations, Enhanced Skeleton and Kinetic Dampening, each at mutation level 12;[3] however, neither of them have any function.

Despite their name, rustaceans have no method of rusting metal equipment.

This section is an excerpt from Shattering Blows#Mechanics.

Shattering Blows grants the attacker a 10% chance to inflict one of the following effects with each cudgel attack:[4]

In extreme cases, such as a historic site filled with

rustaceans, it is completely plausible for a player to get reduced to 0 AV for a long period of time due to this effect. For example, a player with the Calloused skill might have all of their equipment cracked down to 0 AV, as well as a -3 or -4 penalty from a cleaved effect directly applied to themselves.

This information is reliable as of patch 2.0.201.88.
Retrieved from "https://wiki.cavesofqud.com/index.php?title=Rustacean&oldid=60171"
Categories: