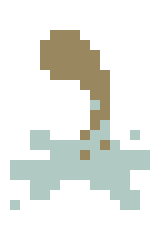 A humor is a creature belonging to the oozes faction. It is a tier 4[1] creature and can be found underground, as well as in

Bethesda Susa and the

Humors are unique in that they can be encountered in one of 4 "forms", with each form granting it various traits and abilities. When a humor spawns, it will randomly be assigned one of the 4 forms, each with an equal chance of being chosen, and will retain that form permanently.[3]

Humors attack in melee with their \giant pseudopods, of which they possess 4. Each pseudopod is a cudgel weapon with a to-hit bonus of +4 and a penetration value of →8. Each pseudopod has a base damage value of

Being oozes, humors lack a mind and thus are immune to abilities and effects that target the mind of a creature, such as Sunder Mind.[5] Additionally, humors cannot slip on slippery liquids such as

When in fire form, a humor's colors will alternate between red, bright red, and yellow.[7] Its heat resistance will be set to 50,[8] and its pseudopods will become flaming pseudopods, dealing heat damage. Additionally, creatures hit by a flaming pseudopod will undergo a forced temperature change of 1d20+5051-70 (Avg: 60.5)° T, up to a maximum of 400° T.[9][10]

When a humor in fire form dies, it will explode, forcibly heating any objects in adjacent tiles by 1000° T.[3]

When in ice form, a humor's colors will alternate between cyan, bright cyan, and white.[7] Its cold resistance will be set to 50,[8] and its pseudopods will become hoary pseudopods, dealing cold damage. Additionally, creatures hit by a hoary pseudopod will undergo a forced temperature change of -1d20-20-40--21 (Avg: -30.5)° T.[9][10]

When a humor in ice form dies, it will explode, forcibly cooling any objects in adjacent tiles by -1000° T.[3]

When in acid form, a humor's colors will alternate between green, bright green, and black.[7] Its acid resistance will be set to 100,[8] making it immune to acid damage, and its pseudopods will become acidic pseudopods, dealing acid damage.[9]

Whenever a humor in acid form enters a tile, it will create a pool of

When a humor in acid form dies, it will explode into several pools of acid. Each adjacent tile to the humor, including the one it occupied, will have a 75% chance of being filled with a pool, with each pool having a volume of 10d1010-100 (Avg: 55) drams.[3]

When in shocking form, a humor's colors will alternate between yellow and white.[7] Its electric resistance will be set to 50, and its movement speed will be increased by 5.[8] Its pseudopods will become sparking pseudopods, dealing electric damage. Additionally, creatures hit by a sparking pseudopod will be struck by an electric discharge, an attack that deals

This information is reliable as of patch 2.0.201.70.
Retrieved from "https://wiki.cavesofqud.com/index.php?title=Humor&oldid=84481"
Categories: