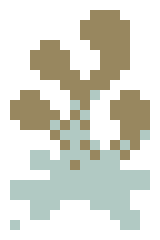 A panhumor is a creature belonging to the oozes faction. It has no natural spawning location and can only be spawned in dynamic encounters.

The panhumor, as its namesake implies, combines the 4 forms of

gyrohumors into a single form, having the properties and abilities of all 4 at once.[1]

Being oozes, panhumors are immune to abilities and effects that target the mind of a creature, such as Sunder Mind.[2] Additionally, panhumors cannot slip on slippery liquids such as

blood, and cannot be knocked prone.[3]

Panhumors attack in melee with their \giant pseudopods, of which they possess 4. Each individual pseudopod is a cudgel weapon with a to-hit bonus of +4 and a penetration value of →8. Each pseudopod has a base damage value of

Panhumors will always have the sparking pseudopod equipped on their primary limb.

When a panhumor dies, it will explode. This explosion will have several elemental properties:[6]

When a panhumor enters a tile, it will create a pool of acid with a volume of 10d1010-100 (Avg: 55) drams in that tile.[6] This will occur even if there is already acid or another liquid present in that tile.

Additionally, panhumors have a +5 bonus to their movement speed.[1]

This information is reliable as of patch 2.0.201.70.
Retrieved from "https://wiki.cavesofqud.com/index.php?title=Panhumor&oldid=84485"
Categories: