Tomb of the Eaters

From Caves of Qud Wiki
Jump to navigation Jump to search
Spoiler Warning: This article contains information normally only found in the course of advancing the main quest line.
Tomb of the Eaters

Tomb of the Eaters

Through the prismatic umbrage fly the archways and buttresses of the monuments above the catacombs of the Eaters of earth. 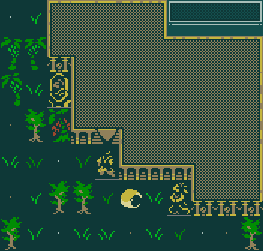 Exterior wall of the Tomb of the Eaters

The Tomb of the Eaters is a the game's largest dungeon-like area. It plays a central role in the main quest.

The tomb is enormous. It fills an entire parasangAn area made of 3x3 screens, which is represented as one tile on the overworld map. and extends for twelve total levels upward and downward throughout that entire area, making for a total area of more than 100 zones. The tomb's exterior perimeter, which passes through 16 additional zones to encircle the Tomb's entire parasang, is constructed of

carved stone from the sultanate of each of the five sultans that preceded Resheph. This carved stone perimeter is dotted with many recesses that are filled with golden

statues of Eaters that are in various states of weathered decay.

The tomb is constructed around the Spindle, which extends vertically through the center of the entire Tomb. This central zone of the Tomb of the Eaters is generally inaccessible, but if the player does manage to dig or phase into this zone, it will be constructed entirely of

burnished azzurum except for a circular opening in the middle of the zone. These central zones are referred to as The Spindle Channel.

Arcade to the Twin Gates

Asphodel, Earl of Omonporch, a key character in the main quest sequence before the player must enter the Tomb of the Eaters.

This entry zone includes the twin gates that seal the tomb, the

Death Gate and the

Life Gate. The player must eventually enter through the Death Gate in order to proceed in the Tomb of the Eaters questline. Attempting to enter the Death Gate before inscribing the Mark of Death will result only in seeing the message The gates are sealed for eternity. The Life Gate is not relevant to the quest and cannot be opened through normal means. 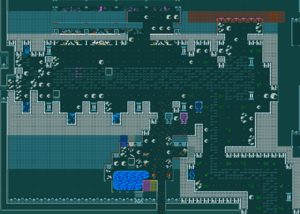 The immediate entrance area within the Tomb of the eaters lay in ruins.

This area, called the Grand Vestibule, Tomb of the Eaters, will be constructed of

gilded marble from the sultanate from several sultan periods, as well as

The vestibule will be filled with ruined sultan murals,

bones, and other refuse. Amidst the rubble, a dark marble walkway will form a path that is also lined with a multitude of

holograms of Eaters. In this section of the tomb more than any other, an industrious player would be wise to bring a

pickaxe or another means of overcoming solid walls, in case the paths proceeding further into the tomb have collapsed under rubble.

ebon fulcrete walls, it is possible to break through (or phase through) the wall and follow the path through several screens. The zone that is directly west of the entry zone will also be part of the Grand Vestibule, and will contain

elevator shafts that one may use to jump down into the Folk Catacombs. However, it is often easier to take the side tunnel rather than try to break through the walls.

This is the full 9-zone parasang layout of the Tomb's surface level.

Side Tunnel into the Folk Catacombs

From the first screen of the Grand Vestibule, immediately inside the Death Gate, there will be a dirt path leading south through two

torch sconces. This leads into the exterior wall of the Tomb, down into a

deep shaft, and then through a tunnel into the southwest corner of the Folk Catacombs. This tunnel actually runs directly underneath

Ezra. It will typically have a high density of graffiti, as if perhaps to indicate it is often used by

graverobbers and other vandals.

The side tunnel is likely to be a preferred route for most players, both because it is one of the easiest and most accessible entry points to the tomb, and also because it leads to an area on the western edge of the catacombs, which is quite close to the Mopango enclave and its related questlines.

The Folk Catacombs are the lowest layer of the Tomb. Each zone will generally be divided into pieces by large chunks of

compacted bone, which can easily be dug through with a

pickaxe. Locations which are safe from the Bell of Rest will be marked with a diamond-shaped tile pattern and grant the tomb-tethered effect, but are otherwise not distinguished from the rest of the floor. The southeast and northeast zones contain stairs leading to the access corridor, the next level up. Most other zones will contain a

stairwell teleporter, which will teleport the player to one of these sets of stairs.

The Folk Catacombs are populated by

bone worms (which can fill areas with even more compacted bone). They can also contain "death pilgrims" of various Sultan cults, which will be drawn from the faction pool for the cult in question.

k-Goninon, a legendary ooze connected to the Fraying Favorites quest, will generate in a random zone in the Folk Catacombs.

The northwest corner of the tomb will contain a mopango enclave, home to

Lebah as well as other mopango. Its

bone oven contains Bone Babka, a meal which grants Burrowing Claws, as well as an AV boost upon identifying an artifact. The enclave is connected to the quests The Buried Watchers and Fraying Favorites. 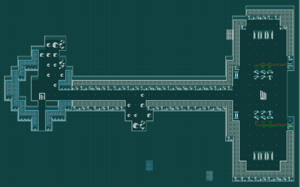 There are two access corridors on the surface level that act as connecting zones between the Folk Catacombs below and the Crematory above. This area will contain several

industrial fans that can potentially blow the player or other creatures into shafts that lead back downward into the Folk Catacombs. The Bell of Rest does not apply in the access corridors.

Omonporch, bypassing the folk catacombs entirely. The shortest point through the walls is straight north, seven tiles from the eastern edge of the zone.

The crematory level is the level 1 strata above ground, reached from the access corridor.

The crematory proper, in the eastern two-thirds of the parasang, is built of

machine walls which leave behind puddles of

lava if broken. It features a large number of hazards along -conveyor belts which move to the west. Hazards include

rotating machine arms which can drop the player into deep shafts down to the Folk Catacombs, and

steaming vents which emit jets of fire at regular intervals. Towards the end of each zone, the northern and southern edges are lined with rows of

industrial fans which can blow the player into shafts. Behind each row of fans are two

fusion power stations, which can be deactivated with

maintenance security cards and above to disable the fans, and a

Following the conveyer belts to the west will lead to the Columbarium: Landlords and Changers, which takes up the western third of the parasang and is full of

statues of Eater. The center of the Columbarium contains stairs up to the next level. Following the conveyer belts backwards to their source will lead to the Crematory Machine Room in the center easternmost zone, which contains two guaranteed

The crematory proper is populated by

gelatinous cupolas, and death pilgrims, similar to the Folk Catacombs; additionally, it contains

strip flies, which can steal items. The Columbarium is populated only by docile

The Crypts are the levels 2 and 3 strata above ground. They are divided into the Lower Crypts: Warriors and Tutors, at 2 strata high, and the Upper Crypts: Priests and Royal Families, at 3 strata high.

reliquaries of the deceased (though sometimes they will instead contain mopango and scrap). The interiors of crypts grant the tomb-tethered effect and are safe from the Bell of Rest.

The contents of reliquaries will depend on the caste of the family buried within, which can be determined by reading the descriptions of the walls and the

door plaque. It will pull either once or twice from the following set of options:[1][2][3]

Most crypts are protected by

crypt sitters, which will awaken if the reliquary is opened, regardless of whether an item was taken from it. They can be awakened by

crypt ferrets stealing items as well as the player.

In addition to the crypts themselves, the Lower Crypts are filled with swaths of

stillvine, with a scattering of holographic trees. The Upper Crypts instead contain more controlled gardens of various plants, potentially including

fractus. However, both Crypt layers have substantial patches of

The Crypts are heavily populated by

crypt ferrets. Crypt ferrets have extremely high DV and can latch onto enemies, preventing them from moving. They are members of the hidden Beasts faction, whose reputation cannot be normally raised, and will thus almost always be hostile to the player, as well as most of the other inhabitants of the Crypts. Their bite can cause bleeding, which can awaken

gorged growth. However, they do not tend to chase targets outside of melee range. They can steal items from

reliquaries and teleport away.

The Crypts are also inhabited by mopango, death pilgrims,

At least one of the zones in each level of the Crypts will contain stairs to the next level up; other zones may contain

stairwell teleporters which will teleport the player to these stairs.

The layers above the Upper Crypts contain the tombs of the historic sultans. They are affected by a powerful ambient "astral friction", which applies normality with strength 40 to all creatures within the zone, and has a 90% chance to deflect esper attacks:

Each level contains a U-shaped hallway of gilded marble from the era of the sultan to whom the tomb belongs, lined with

holograms of Eater, with a main room in the center northern zone of the parasang. This main room contains an

sultan reliquary, and several sultan murals. The murals display alternate descriptions of events from the history of the sultan in question.

The top tomb, 10 strata high, would have been the tomb of Resheph, but is unfinished. It contains no cherubim and thus the

Null Face can be freely taken from the reliquary, although this locks out all the other Sultan reliquaries. By talking to

Herododicus, the player (with a tattoo of the Mark of Death) can demand to be entombed within it. Herododicus will engrave murals depicting the player's achievements. After the murals are complete, the player can enter the

imperial sarcophagus to travel to Brightsheol.

The Bell of Rest 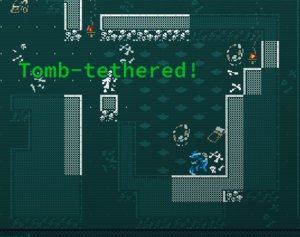 The room above is a Place of Rest, and has tiles marked as such.

An example of the Bell of Rest countdown.

In the Folk Catacombs, the Places of Rest are in seemingly random places. However, as the player progresses to less damaged areas of the Tomb, Places of Rest will be reliably available in the individual intact crypts. There will usually be at least one Place of Rest per zone.

Children of the Tomb

The Children of the Tomb are four biomechanical creatures which inhabit the Tomb, each watched over by a mopango. They are

Dadogom). One Child of the Tomb and its associated watcher will spawn per layer in each of the Folk Catacombs, Columbarium, Lower Crypts, and Upper Crypts. The order is random.