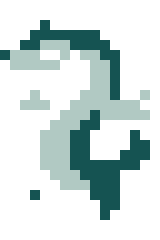 Thin, sharp plates whisper as they press and slide against one another, driven by sinewy and coiling muscle.

crypt ferret are creatures that appear in groups in the middle levels of the Tomb of the Eaters. They are notable for their habit of taking items from

reliquaries and teleporting away. They all have the Mark of Death, and will have all the effects that includes. They are not members of any visible faction and are always hostile to the player, but prefer weasel-business over combat and will not typically pursue the player.

When the player is out of melee range, crypt ferrets prefer to flee and hide in any cells that the player character has not seen in that zone. Once out of sight of the player and/or any player-led creatures, crypt ferrets will look for reliquaries in vision. If one is spotted, they will move towards it, eventually filch a random object from it. They will then teleport away to a random empty cell in the zone. This teleportation can only be used after looting. [1]

If the player has 20 or less turns of the Bell of Rest remaining, the ferrets will stop fleeing to attack directly with their bite. This bite latches onto their target for 15-18 turns their targets with a initial agility save of 25. Attempts to move requires a strength save of 25 to succeed. Breaking free by moving away requires an agility save of difficulty 25.

Crypt Ferrets have extremely high Dodge (DV), making them difficult to hit with conventional attacks. They will often drop valuable items they've pilfered from a reliquary upon death, such as

This information is reliable as of patch 2.0.201.69.
Retrieved from "https://wiki.cavesofqud.com/index.php?title=Crypt_ferret&oldid=60148"
Categories: