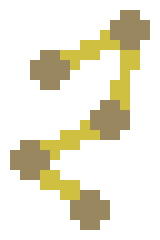 Your joints stretch much further than usual.

Triple-jointed is a physical mutation that grants the player heightened Agility and a mutation level based chance for activated skills that use Agility as their primary stat to not incur their cooldown when used. When this happens, the message log will return "You do that with ease.", and some floating text will appear that says "No cooldown!". This can occur multiple times in succession.

The following abilities are affected by triple jointed's chance to ignore cooldowns.

The following formulas are used to determine Agility bonus (rounded down) and "cooldown cancel" chance based on mutation level. [8]

This information is reliable as of patch 2.0.201.60.
Retrieved from "https://wiki.cavesofqud.com/index.php?title=Triple-jointed&oldid=79582"
Categories: