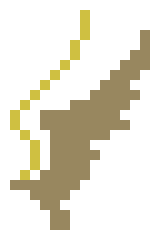 Wings is a physical mutation that grants the ability to fly.

Creatures with the Wings mutation will have their body's "Worn on Back" slot changed to "Worn around Wings". This is purely a cosmetic change, and the creature can still wear back equipment in this slot. The creature also gains the "wings" natural body equipment, which can be seen if nothing is equipped in the "Worn around Wings" slot (similar to how an empty hand has a "fist"). These wings are weightless and provide no

DV, or attack bonuses of any kind.

The Wings mutation is most notable for granting creatures the capability of flight; creatures with this mutation will gain the "Fly" toggleable ability, which will cause the creature to begin flying when toggled on. Flight cannot be initiated if the player is underground. While flying, creatures are unable to be damaged by the melee attacks of non-flying creatures; however, they can still be damaged by ranged attacks and abilities. Flying creatures are able to pass over tiles that are occupied by other creatures or by certain low-height walls, such as

While flying, creatures have a mutation level-based chance to "fall clumsily" to the ground every round. When this happens, the creature will immediately stop flying and will go prone; this will penalize the creature's Agility,

DV, and movement speed, and will force the creature to spend a turn in order to stand back up.

When a creature begins flying, they gain access to the "Swoop" activated ability. This ability allows the creature to make a melee attack against a non-flying target in any direction, including below the creature if they are flying above a tile containing a valid target. When Swoop is used, the creature spends one round swooping down and making an attack, and one round returning to the air. Each time Swoop is used, the creature has a mutation level-based chance to "crash" and fall to the ground; this chance is doubled if their attack is blocked by a shield.

Creatures with the Wings mutation gain bonus movement speed while sprinting. Additionally, the Jump and Charge abilities gain additional range when used by creatures with Wings. These bonuses depend on the creature's mutation level.

If the player initiates flight while on the world map, they will receive a mutation level-based multiplier on their movement speed while traveling on the world map, which will reduce the amount of in-game time it takes to travel. Additionally, their chance to become lost will be reduced by a mutation-level based amount.

Finally, creatures with Wings will have +400 reputation with the birds and winged mammals factions.

The following formulas are used to determine bonuses and penalties based on mutation level.[1][2][3]

Note that world map travel speed and chance to get lost bonuses apply only if the player is actively flying while on the world map.

This information is reliable as of patch 2.0.201.69.
Retrieved from "https://wiki.cavesofqud.com/index.php?title=Wings&oldid=74801"
Categories: