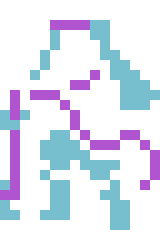 Spools of hair are bunched under the frustum of her habit, her round cheeks are smeared with polyurethane and Spindle dust, and her face is pulled low by the violence of her square jaw. Long, muscular forearms are tensed by the repeated pinching motion of tool manipulation. Her eyes are ultra keen and shine bright cyan, and her vision smoothly segues between her work and her surroundings.

Yla Haj is a legendary member of the Daughters of Exile faction. She is a tinker and a merchant who resides in the northwestern corner of

Yla Haj is a member of the Daughter of Exiles, a group consisting of "tinker-nuns" who seek to better know Rebekah, a teacher to Resheph, the last sultan of Qud. Yla Haj has the "honor" among her "sisters" of permanent residence next to Rebekah's gravesite, which she claims is a "holy site" for the Daughters, and which is located close to her shop in the southwestern corner of Ezra. Yla Haj claims to live a life of "unbelonging", and tells the player: "...the shape of a society is visible only from the outside, and there is peace beyond a boundary."

Yla Haj does not seem to think highly of

Zothom the Penitent, referring to him as him a "fool", and saying of him: "I have no use for a man who seeks salvation in the body of a dead woman."

Additionally, she seems to dislike her neighbor

Sixshrew, as when asked what she thinks of xem, she simply responds: "I don't." Sixshrew similarly dislikes Yla Haj, calling her a "fleshy tinker" and complaining of the "racket" that comes from her work.

Yla Haj will restock the following:[2][3]

Yla Haj will not restock the following:[4][5]

Yla Haj will always come equipped with a

steel utility knife and a

stun rod, which she will utilize in melee combat.[5] Additionally, she will possess a set of

quartzfur hat, a pair of

powered exoskeleton which is guaranteed to be modified.[4]

Yla Haj can never spawn disliked or hated by the Farmers' Guild or the Fellowship of Wardens.

The player is able to perform the water ritual with Yla Haj. As a member of the Daughters of Exile, she will share secrets about Resheph (specifically those that involve Rebekah), and is interested in learning secrets regarding sultan tomb inscriptions, or gossip involving the Daughters of Exile. She can also teach the player the Repair skill, or 1-2 random blueprints. Finally, she can be recruited as a companion.[6]

This information is reliable as of patch 2.0.201.94.
Retrieved from "https://wiki.cavesofqud.com/index.php?title=Yla_Haj&oldid=79671"
Categories: