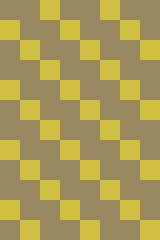 The synthetic mist called Golden Dawn ascends from its canister to atomize leafage and leave a clear view of the horizon in its wake.

Defoliant is a type of gas that is a damaging to plants and to objects composed of live plant matter. defoliant can seep through walls and other occluding objects.

It can also damage worn equipment (such as a

vine-weave tunic), but does not affect items held in the inventory.

Common sources of defoliant, with their level and density, include:[1]

The damage done by defoliant depends on the target.[8] For a more detailed breakdown of the types of targets listed here, refer to the Objects Affected section below.

The following damage formulas are used to calculate defoliant damage:[8]

In theory, this means that a typical cloud of defoliant gas (~100 density) will deal approximately:

The density of defoliant can get significantly higher than 100 if several sources of it are combined, such as multiple

defoliant grenade mk IIIs or successive shots from a

defoliant pump. Because defoliant can seep through walls, however, it will not be contained by enclosed rooms or tight hallways - it will continue to spread and dissipate after it is released.

This information is reliable as of patch 2.0.201.49.
Retrieved from "https://wiki.cavesofqud.com/index.php?title=Defoliant&oldid=86744"
Categories: