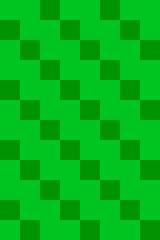 Even now the nimbus of vaporized acid is condensing, starting to settle on its colonized surfaces, starting to sink through their soft edges.

Corrosive gas is a damaging gas that can seep through walls and other occluding objects, often destroying them in the process.

Common sources of corrosive gas, with their level and density, include:[1]

The damage done by corrosive gas depends on the target:[11]

In practice, gas damage is highly variable due to a significant amount of randomization involved in gas behavior.

Gas is constantly moving between cells, dissipating over time, merging with other gas, and being affected by random calculations in the game engine. Its density, which is the main predictor of damage, is always changing.

Corrosive Gas Generation mutation. With that mutation, a creature releases 100 density units of gas into the cells around them each turn, and can continuously release gas for many turns depending on mutation level. This can result in very high density gas if the mutant releases all gas into the same area without moving.

The following table indicates how much damage corrosive gas of a certain level will do per round, depending on gas level and density. Keep in mind that enemy acid resistance may reduce these numbers.