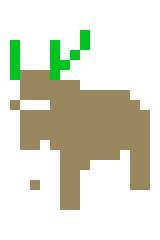 This stout, thickly-muscled herbivore is intensely territorial, violently attacking anything that crosses their path.

A fork-horned gnu is a creature and the sole member of the antelopes faction.

chitinous pumas, who will be hostile to the gnus.[1]

Fork-horned gnus attack in melee with their \hooves, of which they possess 4. Each hoof is a cudgel weapon that deals

Horns, which are considered both an armor piece that increase their

AV by 2, and a Short Blade weapon that deals

While fork-horned gnus are incredibly aggressive as their description suggests, and will attack most creatures on sight due to their faction relations, they will begin neutral to the player and won't attack unless provoked.[4]

This information is reliable as of patch 2.0.201.71.
Retrieved from "https://wiki.cavesofqud.com/index.php?title=Fork-horned_gnu&oldid=73033"
Categories: