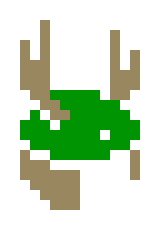 The moss-strewn antlers of some great elk appear to have grown from atop this ageless, leather helm.

The fork-horned helm can be:

This information is reliable as of patch 2.0.201.114.
Retrieved from "https://wiki.cavesofqud.com/index.php?title=Fork-horned_helm&oldid=85652"
Categories: