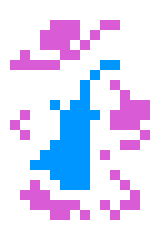 "Let the manes put off their terror, let them put off their aqueous bodies with fire.
Let them draw together the bones of the metal.
Selvaggia, Guiscarda, Mandetta,
Rain flakes of gold on the water
Azure and flaking silver of water,
Pallor of silver, pale lustre of Latona,
By these, from the malevolence of the dew
Guard this alembic.
Elain, Tireis, Allodetta
Quiet this metal."
-Ezra Pound

Bethesda Susa, on the third level of the ruined ward.[1] They are a mysterious figure with a special love for all things liquid.

The alchemist is a hermit and a liquid-tinker who has set up their workshop within the depths of Bethesda Susa. They purport to be a "connoisseur" of liquids, but claim to "dabble" in other states of matter as well.

The alchemist seems to be well known in Qud, at least amongst other liquid-tinkers.

ichor merchants will occasionally mention their desire to "plumb the depths of Bethesda Susa" in order to meet the alchemist.

Hortensa names the alchemist as an "amateur liquid-tinker, poet, [and] merchant", and claims their methods "aren't scientific", warning the player to be careful around them.

phials, with the exception of

water (which they have but won't sell).[2] This includes some exceptionally rare and valuable liquids such as

brain brine. They do not restock.

However, the alchemist is also quite conflict avoidant: they will immediately cease hostilities and begin fleeing from threats if their hitpoints fall below 99%[4] of their maximum.[5]

Belonging to the grazing hedonists faction, the alchemist normally will not initiate attack with the player or other creatures, but other creatures in

lurking beths. Clearing out the floor so no creatures of an opposing faction will meet the alchemist is recommended to prevent untimely neutronic-related death.

Speaking to the alchemist grants the Quiet This Metal achievement.[4]

This information is reliable as of patch 2.0.202.103.
Retrieved from "https://wiki.cavesofqud.com/index.php?title=Alchemist&oldid=78527"
Categories: