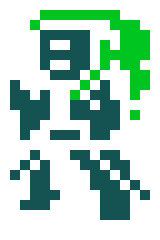 Their apron is damp with the sap of a thousand trees. Their lips are painted in watercolor. They wring ichor from their hair. 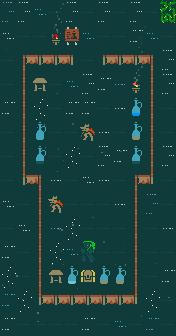 An ichor merchant in their tent in the

Stiltgrounds, along with two hired

An ichor merchant is a type of merchant which sells various liquids, liquid containers, and

desalination pellets. At least one is guaranteed to spawn in the

sign variant found outside their tents, which appears to have a bottle on it.

Aren't they beautiful, (player's formaladdressterm)? The bottles, the phials, the light shining through them.

Live and drink, but not everything. Some things you don't drink.

Is there any state of form so fine as a liquid?

If it flows, I desire it. You should too, (player's formaladdressterm).

Do you ever stop and think about fluids? Are they not divine?

Someday I will plumb the depths of Bethesda Susa, that I may meet the Alchemist.

Live and drink, and collect, and combine...