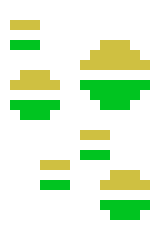 A gang of tiny, plastic gyroscopes undulates toward you. For what purpose were they originally designed to serve? The echo of that memory has long since waned in the chrome halls of Qud.

Plastronoids are mid-level robots encountered in large numbers in

Bethesda Susa. They're not very dangerous, but release clouds of

normality gas on death, causing substantial problems for espers and other characters weak to normality.

Characters not reliant on mental mutations or normality-affected technology like force fields may instead find them useful within Bethesda Susa, since the gas they produce can prevent a

twinning lamprey from respawning its twin. For their threat level, they also provide an excellent amount of experience.