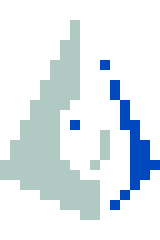 A mountainous pyramid of chrome hovers about you. The volume around it appears furrowed somehow, and sound only comes through in waves; it's as though space and time themselves were crumpled away before the thing's very presence.

The chrome pyramid is a high level robot in the

deathlands that has both powerful ranged and melee combat options. Because the player starts with -475 reputation with robots, chrome pyramids are hostile to the player by default. When one is in the zone, the screen will ripple in waves from the pyramid similar to a

Space-Time Vortex. This is cosmetic. Chrome pyramids always have a

Force Bubble around them, making it difficult to get close without a

force modulator or sources of EMP or normality effects (grenades or otherwise).

For ranged combat, they have a

HE Missiles in a shotgun pattern. Each HE Missile deals →17

If their target is in melee range or their swarm rack is disarmed, chrome pyramids aggressively approach the player to use their distortion field. The distortion field is a →18(on average) cudgel with +10 to-hit that deals

Killing one grants an achievement. For a guide on how to do so, see Chrome pyramid/Killing.