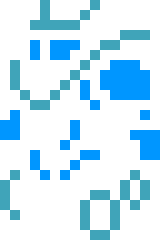 A machine wrought from some primordial black metal into the likeness of a man, Rodanis Y towers over the halls of Grit Gate.

Grit Gate.[1] They are a large humanoid robot.

Rodanis Y is a robot presumably constructed by the Barathrumites to defend Grit Gate under dire circumstances. Little is known about Rodanis Y, as they do not speak, and are only mentioned briefly by

Otho during A Call to Arms, where he tells the player how to activate them.

When first encountered in Grit Gate, Rodanis Y will be deactivated due to a lack of power. While deactivated, Rodanis Y will be completely incapable of movement or action of any kind, and will remain so until they are provided with energy via broadcast power.[2] They require 500 units of energy per turn to remain activated.[3]

Rodanis Y can be activated after the player acquires the

broadcast power station and provide Rodanis Y with energy.[4][5] The player can also utilize the card to activate the station directly. During A Call to Arms, the player can utilize Ereshkigal to remotely activate the broadcast power station, which will take 100 amps from Grit Gate's power supply. If the station is deactivated, Rodanis Y will also deactivate.

So long as Rodanis Y is activated, they will flash purple.[3]

Rodanis Y attacks in melee with their \tungsten carbide axe-fist and \tungsten carbide hammer-fist, which are an axe and a cudgel weapon respectively. Each fist has a +6 to-hit bonus and a penetration cap of →14, and deals

Rodanis Y possesses the Cudgel Proficiency, Bludgeon, Slam, Axe Proficiency, and Dismember skills. These allow them to daze, stun, and dismember their targets. Rodanis Y will knock opponents an extra 4 tiles when using Slam, for a maximum distance of 7 tiles, which can cause considerable collateral damage during A Call to Arms. Additionally, Rodanis Y possesses every skill in the Dual Wield skill tree, allowing them to make attacks more often with their offhand, as well as granting them use of the Flurry ability.[3]

If the player attempts to speak to Rodanis Y while they are deactivated, they will be met with the following message:

Otherwise, they will only respond randomly with one of the following:

This information is reliable as of patch 2.0.201.76.
Retrieved from "https://wiki.cavesofqud.com/index.php?title=Rodanis_Y&oldid=79585"
Categories: