From Caves of Qud Wiki
Jump to navigation Jump to search
This page describes the property of being robotic, or a "robot". For a more general usage of the term, see Robot (disambiguation).

Robotic creatures, or simply "robots", possess a wide range of traits and characteristics that distinguish them from non-robotic creatures; principle among these are that robotic creatures are made of metal, are inorganic, and lack psionically accessible minds. 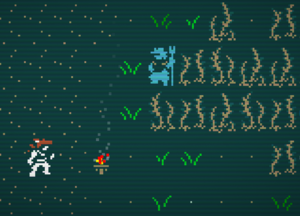 An example of a mechanical Mehmet.

Every creature in the game has a 1 in 20,000[14] chance to spawn mechanical, unless the creature is normally robotic. This will change the creature's main color to chrome and will grant them nearly all of the usual properties of robotic creatures. Mechanical creatures will not drop corpses if their non-mechanical versions normally do. Additionally, mechanical creatures will have the following appended to their descriptions:[19]

This information is reliable as of patch 2.0.201.75.
Retrieved from "https://wiki.cavesofqud.com/index.php?title=Robotic&oldid=80289"