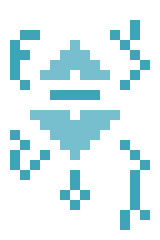 The head and torso of the cloneling are comprised of skull-sized, hexagonal pyramids of polished chrome. Four many-jointed chrome rods swivel from their core, wielding rusty scalpels, and another hangs limply: the cloneling's genetic nanoprinter.

A cloneling is a creature commonly found throughout

Bethesda Susa and on levels 2 and 4 of

Golgotha.[1] Though a cloneling has four scalpels it can use as melee weapons, its principal threat is its ability to produce clones using a supply of

A cloneling spawns with 10-40 uses of its cloning ability.[2] Periodically, a cloneling will pick a random tile it can see, and if it finds a cloneable creature there that it matches phase and flight with, will attempt to clone that creature. [3] If it succeeds, the ability will be on cooldown for 2d102-20 (Avg: 11) turns, and a clone of the creature will be created. This clone:

If their cloning is on cooldown, they will prefer to wander around.

When a cloneling is defeated, they have a chance of dropping a

cloning draught. This chance increases the more uses of the cloning ability they have left. The probability is:

This means that the chance is around 0% - 8% at the very maximum, with an average of 5% if it has not made any clones.

If the cloneling is nonhostile or the player character is a cloneling, a new context menu relating to them allows the player to refill cloning usages using cloning draught. This requires 1 pure dram of cloning draught, and will refill the uses back to the maximum of 40. [7]

Clonelings can also drink from a container containing cloning draught to refill uses. If the dram consumed is unpure, the uses will only fill in proportion to the amount of cloning draught in that dram. This number is not additive: for example, if there are still 5 uses left and the dram consumed refills 20 because the liquid was 50% draught and 50% water, the number of uses left will be set to only 20.

Clonelings are most threatening when there are powerful cloneable hostiles nearby, since their clones will also be hostile. However, if the player or the player's party members have offensive area of effect abilities, any clones of them will share these abilities and use them without restriction, leaving the player vulnerable to crossfire even when the clones are friendly. Consequently, prioritising the destruction of clonelings is often a good idea.

True Kin can use rebuked clonelings to clone merchants en masse. It's possible to temporarily turn off a cloneling follower's cloning ability.

This information is reliable as of patch 2.0.202.22.
Retrieved from "https://wiki.cavesofqud.com/index.php?title=Cloneling&oldid=78512"
Categories: