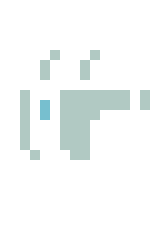 There's an oculus in the center of the dragonfly drone's sensory array. It unshutters with a whir and emits a glowing beam of force.

interdictors are robots that limit the movespeed of their targets instead of doing damage using Interdiction.

Interdiction is a mental mutation that selects a hostile creature within the user's line of sight and within 10 tiles and inflicts them with Interdicted, giving the target a 10 Movement Speed penalty. This cannot be used if the interdictor is Pulsed. Interdiction is an omniphase effect.

When a creature is a target for Interdiction, a blue line will be drawn from the interdictor to the target. The message "(user) locks on to (target)." also displays. The 10 tile range is only used when initially selecting a target; if the target moves further than 10 tiles away from the user, it will not break interdiction.