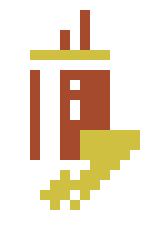 A braided silver column lasermount. Their fragile, chrystachrome shell shatters on impact and reconstitutes itself away from danger.

The mercurial is a robot that uses teleportation as its only form of movement. It fires at enemies from range, and it will teleport to a random location in the current zone whenever it takes damage.[1].

The mercurial uses a

laser rifle as its primary weapon, and will also be carrying 3

chem cells.[2] It will drop all of these items on death, but due to its teleportation ability, the loot will be displaced to a random cell in the current zone. Generally, it is possible to determine approximately where the loot landed by watching for the swirling particle effect associated with this teleportation ability.

This information is reliable as of patch 2.0.201.49. If this is no longer the current patch, you can help by updating it.
Retrieved from "https://wiki.cavesofqud.com/index.php?title=Mercurial&oldid=74995"
Categories: