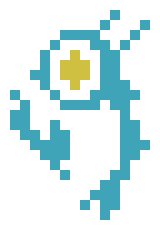 A man-sized cylinder hovers just above the floor. They emit a low, menacing hum as they glide slowly, searching for intruders with their many protruding sensor arrays. A long, articulated arm, ending in a sparking rod, dangles from their side.

Waydroids are robots typically found in

Grit Gate. According to Argyve, they were built by the Barathrumites to guard Grit Gate.

If the player character is holding a

droid scrambler either in their main inventory or an equipment slot, waydroids are initially friendly towards them and their companions. Otherwise, they react like other robots (hostile by default). The scrambler has no effect if held by a creature that is not the player character or dominated by the player character. In particular, having a companion hold it is ineffectual.[1]

When a waydroid is affected by a droid scrambler, it will no longer grant XP, even if the droid scrambler is dropped. However, yet-to-be-loaded waydroids will be unaffected.