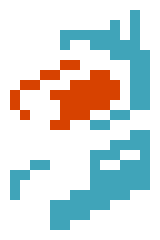 Particles spin in the molecular orrery of its engine and whir against its chrome-plated chassis. Life-lint powders the inside of its elliptical cannon.

The decarbonizer is a high tier robot found deep underground. It does not move nor have physical attacks; instead, the decarbonizer uses its decarbonizing cannon to dismember targets.

With this mutation, the decarbonizer can take one turn to aim at a target 40 + (mutation level) tiles away. This spins up their molecular cannon, and telegraphs a bright red line at the target. After three turns, this beam will fire down the selected path, and all creatures within this path must make an Agility save of difficulty 20. If they fail this, they will have 1-4 of their limbs randomly dismembered. Even though the decarbonizer does not have decapitate, the head is an eligible limb to dismember. This beam is also Omniphase, so it can dismember creatures in any phase other than Nullphase.

After the decarbonizing beam has fired, the ability may not be used until 200 more turns have passed.

Due to the fact that the decarbonizing beam is a mutation rather than a weapon, the decarbonizer cannot be disarmed nor dismembered to stop it firing.

Decarbonizers are most likely to be found deep underground due to their high creature tier value - they are tier 8 creatures. For more information about how creature tier influences random generation, refer to the Tiers and Procedural Generation topic.