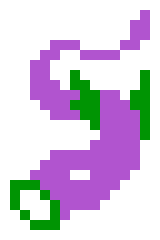 A ribbon of scaleless tissue quivers in suspension beyond a mouth ringed with repeating triangle teeth. It extrudes a double through the mirrored planes of reality.

The twinning lamprey is a creature that spawns in pairs, and has a special ability to respawn a new, fully-healed copy of itself unless both copies are killed in the same turn.

The lamprey's \psychic bite is similar to a psionic weapon - it is defended by the target's MA instead of the target's AV. This can make the lamprey's attacks more dangerous to characters with low willpower.

This section is opinion-based. Your mileage may vary.
Retrieved from "https://wiki.cavesofqud.com/index.php?title=Twinning_lamprey&oldid=78480"
Categories: