Fjorn-Kosef, Who Knits The Icy Lattice

From Caves of Qud Wiki
Jump to navigation Jump to search
Fjorn-Kosef, Who Knits The Icy Lattice 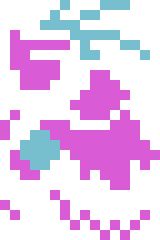 Fjorn-Kosef, Who Knits The Icy Lattice

A latticework of frost sticks to Fjorn-Kosef's coarse beard and bushy brow hair. The great, bony slab of his head is obscured behind his icy breath, and swathing his anemic, misshaped arms are long strands of icy filament.

Fjorn-Kosef, Who Knits The Icy Lattice is a legendary troll encountered in the second Healing Pool level of

Bethesda Susa. He is the second of the three legendary trolls found there, being preceded by

Jotun, Who Parts Limbs and followed by

Haggabah, Who Plies The Umbral Path.

Fjorn-Kosef uses his fists to fight in melee combat, as well as a mutation unique to him, Frost Webs, at range.

Fjorn-Kosef's \ice-encrusted fists are technically tier 4 artifacts that are classified as cudgels. They always come with the freezing item mod and are always slotted with

1d61-6 (Avg: 3.5) base damage, plus 3-4 cold damage, and have →9 PV due to Fjorn-Kosef's Strength bonus.[1] Despite their status as artifacts, they are attached to Fjorn-Kosef's body and cannot be removed or obtained, and he will not drop them or their installed cells upon death. However, dominating him will allow the player to uninstall and drop the cells.

To supplement his fists, Fjorn-Kosef possesses Cudgel Proficiency as well as several skills from the Dual Wield skill tree, including Offhand Strikes and Ambidexterity. Finally, he has the Swimming skill, allowing him to move more quickly through the pools of

convalessence found within his lair. [1]

Fjorn-Kosef possesses a unique mutation known as Frost Webs. This grants him the "Knit Frosty Webs" activated ability, which when used, allows him to create

frosty webs on a tile of his choosing up to 12 tiles away. The selected tile will be guaranteed to populate with webs, while the 4 tiles orthogonally adjacent to that selected will have an 80% chance of being populated.[2] The webs themselves behave much like normal

webs, causing creatures to become stuck upon occupying the same tile as them, but have the additional effect of cooling creatures next to or within them due to their extremely low temperature of -250°.[1] This can cause the creature to freeze following prolonged exposure.

Like the other legendary trolls, Fjorn-Kosef will begin to bud when the player is within the same zone as him, which will cause him to produce a

troll foal in an adjacent tile after 1d5+1112-16 (Avg: 14) rounds. These foals are allied to Fjorn-Kosef and share his alignments, attacking anything hostile to him. Fjorn-Kosef will begin to bud again immediately after producing each troll foal; however, he cannot produce more foals if he is surrounded on all sides by creatures or walls, or if there are already 18 troll foals within the current zone.[3]

Fjorn-Kosef has the unique property of being extremely difficult to freeze himself, having a freezing point and brittle temperature of -9999°.

Additionally, like the other legendary trolls, Fjorn-Kosef is capable of holding two-handed weapons in one hand; however, his ice-encrusted fists prevent him from holding anything.[1]

stairs down, leading further into Bethesda Susa. The room is composed of

marble walls; entry is permitted through a silver

thick metal door, unlocked via a

silver key. One can always be found within Fjorn-Kosef's inventory, though such a key can also be obtained in other ways, notably as a reward from village quests. The key can be retrieved by killing Fjorn-Kosef, or by trading with him if the player's reputation with trolls is sufficiently high.

Entering the room containing the stairs does not necessarily require the player to go through the door; they can also break the walls or circumvent them through other methods, such as

Phasing through them or

Teleporting past them. Additionally, creating stairs down using a

spiral borer can allow the player to skip the room entirely.