From Caves of Qud Wiki
Jump to navigation Jump to search
This information is reliable as of patch 2.0.201.50. If this is no longer the current patch, you can help by updating it.
Jotun, Who Parts Limbs 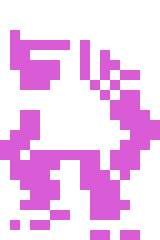 The troll called Jotun slumps beneath the weight of his broad and cragged back. Soaking fibers of inky, unkempt hair enswathe the great, pale rocks that are his shoulders. Crossed over his chest are two carbide axes, their shafts knurled and rotting with rust. Jotun's rumpled eyelids lay half-shut over the discs of his sluggish eyes as he reclines in his bath of convalessence.

Jotun, Who Parts Limbs is a legendary troll encountered in the first Healing Pool level of

Bethesda Susa. He is the first of the three legendary trolls found there, followed by

Fjorn-Kosef, Who Knits The Icy Lattice and

Haggabah, Who Plies The Umbral Path.

Jotun lacks any unique special abilities, instead employing a variety of axes and relying on his high Strength and Agility in combat.

Jotun always comes equipped a with

two-handed carbide battle axe. Jotun, like the other legendary trolls, has the unique property of being able to hold two-handed weapons in only one hand, allowing him to dual-wield these axes.[1] Due to his high Strength, attacks made using his axes will have the maximum possible PV value (→10 and →9, respectively).

To supplement his axes, Jotun possesses several axe skills including Axe Proficiency, Cleave, Hook and Drag, and Dismember. He also has Offhand Strikes and Ambidexterity, allowing him to make attacks with his secondary axe more often, as well as the Charge skill to enable him to quickly close the distance between him and his target. Finally, he possesses the Swimming skill, allowing him to move more quickly through the pools of

convalessence found within his lair.[1]

Jotun will always spawn with 16

throwing axes, which he will utilize in thrown weapon combat if his target is outside of melee or Charge range. Due to his high Strength and Agility, he is able to throw his axes extremely far and accurately, very rarely missing his target. Each axe deals

Jotun is notable for being the only legitimate source of throwing axes in the game, apart from the occasional quest item.

Finally, like the other legendary trolls, Jotun will begin to bud when the player is within the same zone as him, which will cause him to produce a

troll foal in an adjacent tile after 1d5+1112-16 (Avg: 14) rounds. These foals are allied to Jotun and share his alignments, attacking anything hostile to him. Jotun will begin to bud again immediately after producing each troll foal; however, he cannot produce more foals if he is surrounded on all sides by creatures or walls, or if there are already 18 troll foals within the current zone.[2]

stairs down, leading further into Bethesda Susa. The room is composed of

marble walls; entry is permitted through a bronze

thick metal door, unlocked via a

bronze key. One can always be found within Jotun's inventory, though such a key can also be obtained in other ways, notably as a reward from village quests. The key can be retrieved by killing Jotun, or by trading with him if the player's reputation with trolls is sufficiently high.

Entering the room containing the stairs does not necessarily require the player to go through the door; they can also break the walls or circumvent them through other methods, such as phasing through them or teleporting past them. Additionally, creating stairs down using a

spiral borer can allow the player to skip the room entirely.

Caution: This article or section contains unverified speculation and should not be considered canonical.