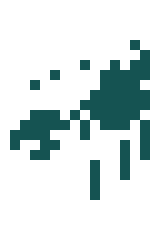 There are inglenooks on the hearths of spacetime where darkling things are. They are impossibly cavernous and yet impossibly narrow. Thusly it's explained how this gargantuan spider has legs that are crushed into the paper thinness of the void. They rise in lines like black braids in the night until a joint shunts them off in another direction, back toward the thing's crumpled thorax and panting glands.

A phase spider is a creature belonging to the arachnids faction. Two phase spiders, one normal and one special variant, can be found in the two cryobarrios levels of

Bethesda Susa.[1][2] Phase spiders can also rarely be found underground in cryotubes.[3] They are excluded from dynamic encounters.[4]

Phase spiders, as their name suggests, are permanently out-of-phase, meaning they are intangible to physical objects.[4][5] As such, they are unable to attack or be attacked by creatures who are not also phased or omniphase, with some exceptions. Despite this, they will be hostile to the player by default and will follow them around.

Phase spiders will use their

Spinnerets mutation, which they possess at level 7, to weave

phase webs. These webs can cause creatures who walk into them to become stuck. The creature will also phase out for as long as they remain stuck, which will allow a phase spider to attack them.[6]

Phase spiders attack in melee with their \bite, a natural cudgel weapon that deals

5d55-25 (Avg: 15) damage. Their bite also has a 25% chance to apply a special kind of poison known as phase spider venom to creatures.[4] Creatures can make a Toughness save against the injection of the venom with a difficulty of 20. Phase spider venom will deal

3d33-9 (Avg: 6) damage every round for 1d4+45-8 (Avg: 6.5) rounds, as well as prevent natural regeneration and halve the effectiveness of healing effects. It will also cause the creature to phase out for 3-6 rounds, plus 1-2 rounds for every round they spend poisoned. When the venom wears off, the creature will become ill for 71-89 rounds.[7][8]

The "phase spider coward", as it is referred to internally, is a unique phase spider than can be found in one of the cryotubes on the second cryobarrios level of Bethesda Susa.

The phase spider coward is identical to normal phase spiders, save for the fact that it is a member of the grazing hedonists faction as well as arachnids. Due to this, it will be neutral to the player by default, and will randomly wander around spinning phase webs. However, it will become hostile immediately if the player becomes stuck in the same zone as it, even if they become stuck in something other than the spider's webs.[4][9]

This information is reliable as of patch 2.0.201.73.
Retrieved from "https://wiki.cavesofqud.com/index.php?title=Phase_spider&oldid=64318"
Categories: