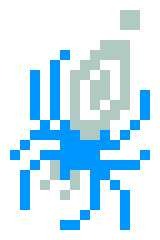 Evolutionary pressures have reshaped the anatomy of the voider: fangs have descended from its basal segment, the arciform chambers of its shunting gland have fractalized, and its frame has grown an order of magnitude to match the predatory potency of its other advantages.

The greater voider is a creature belonging to the arachnids faction. Greater voiders can be found underground in tier 6 zones.[1]

voiders, greater voiders are aggressive and will pursue their targets instead of fleeing. They attack in melee with their \bite, a natural short blade weapon that deals

4d34-12 (Avg: 8) damage.[2] Upon hitting with their bite, greater voiders will teleport both their target and themselves to their lair, regardless of whether or not the attack successfully penetrated. This cannot occur if there is no lair within the current zone, or if the target is already within the lair.[3][4]

Upon death, greater voiders have a 15% chance to drop a

greater voider corpse. This corpse can be butchered to produce one 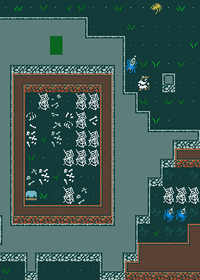 An example of a greater voider lair, including corpse with loot.

When a greater voider is spawned, their "lair" is also generated somewhere in the same zone. This lair is distinct from the lairs of legendary creatures, and is a simple rectangular room with walls made of

shale and no exits.

webs will be scattered throughout. If there are multiple greater voiders in the same zone, they each will usually have their own lair; however, sometimes multiple voiders will share a single lair.

Each lair has a 10% chance to spawn with a greater voider's previous victim, which will be a random humanoid corpse.[4] On this corpse will be the following items:

This information is reliable as of patch 2.0.201.73.
Retrieved from "https://wiki.cavesofqud.com/index.php?title=Greater_voider&oldid=60226"
Categories: