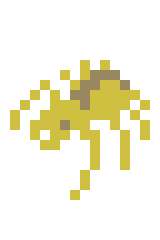 The tiny hairs of this dog-sized spider stick straight up and crackle with electrical energy.

An electrofuge is a creature belonging to the arachnids faction. Electrofuges can be found underground, as well as in

Grit Gate, and underground in the

Electrofuges attack in melee with their \bite, a natural axe weapon that deals

Electrofuges also attack via their "Discharge" ability, granted by their unique "Electrified Carapace" mutation, which they possess at level 1.[2] This ability utilizes "charges", which are accumulated by an electrofuge at a rate of 1 charge every 39 rounds, up to a maximum of 5 charges. An electrofuge can expend all of its accumulated charges to discharge electricity onto an adjacent target, which will deal

1d41-4 (Avg: 2.5) electrical damage for every charge spent. This discharge is able to arc to creatures adjacent to the target.

This information is reliable as of patch 2.0.201.73.
Retrieved from "https://wiki.cavesofqud.com/index.php?title=Electrofuge&oldid=60221"
Categories: