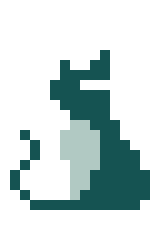 They flicker behind their marble coat, synchronously inhabiting this dimension while stalking the dreamy corridors of their own chimeric world.

An astral tabby is a creature belonging to the cats faction. Astral tabbies can be found deep underground in tier 8 zones.[1]

Astral tabbies are perhaps most notable for their unique mutation, Astral, which causes them to be permanently phased.[2] This means they are intangible to physical objects, and as such are unable to attack or be attacked by creatures that are not phased or omniphase, with some exceptions. The phased effect can be counteracted with normality.

Astral tabbies will be hostile to the player by default, though due to being phased, they will not normally be able to attack the player, and will simply follow them around instead. If the player becomes phased, or if an astral tabby becomes in-phase, it will be able to attack, and will do so in melee with its \bite and \claws. These are natural axe weapons that each have a penetration bonus of →6 and a damage of

6d26-12 (Avg: 9), and possess a special version of the serrated mod which gives them a 75% chance to dismember a target on hit.[3][4] To supplement their bite and claws, astral tabbies possess the Axe Proficiency, Cleave, and Dismember skills.[5]

Astral tabbies are swarmers, meaning they gain +1 to their to-hit and penetration rolls for every other swarmer adjacent to their target.[6]

This information is reliable as of patch 2.0.201.87.
Retrieved from "https://wiki.cavesofqud.com/index.php?title=Astral_tabby&oldid=60096"
Categories: