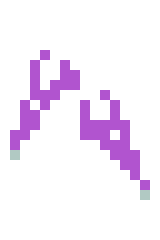 Cerata pendulate on the shoe tips like the Beetle Moon curled through fog. They mirror rich hues in cerulean, ruby, star orchid, and void; together they shine to resplendent effect.

Kaleidocera krakows are footwear that are part of a broader set of kaleidocera equipment. They are notable for having the highest resistances of any footwear available in Caves of Qud.

kaleidocera krakows, have some of the highest all-around resistance values of any equipment in the game. Each piece of equipment also grants a bonus to Ego and a small chance to refract light-based attacks.

Kaleidocera equipment can be obtained by butchering the corpse of a

kaleidoslug. However, the kaleidoslug has only a 6% chance of dropping a corpse when it is killed. Once a corpse is obtained, butchering the corpse guarantees one piece of kaleidocera equipment, but the specific piece of equipment obtained is random - each has a 1-in-3 chance of being butchered from the corpse.

Despite having the highest resistances of any footwear in the game, along with several other bonuses, the AV and DV values of the kaleidocera krakows (

1) may be considered too low for some players when compared to alternative high-tier footwear, like the