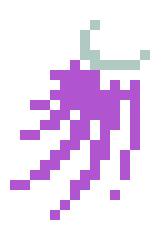 Cerata pendulate on the cape like prism grass of a windy meadow. They mirror rich hues in cerulean, ruby, star orchid, and void; together they shine to resplendent effect.

A kaleidocera cape is one part of a broader set of kaleidocera equipment. It is notable for having the highest resistances of any back equipment available in Caves of Qud.

kaleidocera krakows, have some of the highest all-around resistance values of any equipment in the game. Each piece of equipment also grants a bonus to Ego and a small chance to refract light-based attacks.

Kaleidocera equipment can be obtained by butchering the corpse of a

kaleidoslug. However, the kaleidoslug has only a 6% chance of dropping a corpse when it is killed. Once a corpse is obtained, butchering the corpse guarantees one piece of kaleidocera equipment, but the specific piece of equipment obtained is random - each has a 1-in-3 chance of being butchered from the corpse.