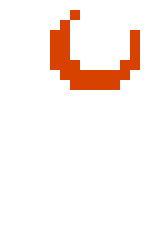 An Issachari banner is a type of equipment worn on the back.

While, like most back armor, it provides little physical protection, an Issachari banner does give 200 bonus reputation with the Issachari tribe.

Sometimes when speaking to a member of the Issachari tribe, they will say the following:

Red and white are the colors of Issachari banners and

This section is opinion-based. Your mileage may vary.
Retrieved from "https://wiki.cavesofqud.com/index.php?title=Issachari_banner&oldid=85634"
Categories: