From Caves of Qud Wiki
Jump to navigation Jump to search
This is paid content only available to patrons.
This content can be downloaded by being a Arconaut+ tier patron of Freehold Games.
You, but mechanical 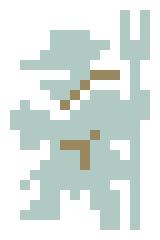 It's you. There is a low, persistent hum emanating outward. 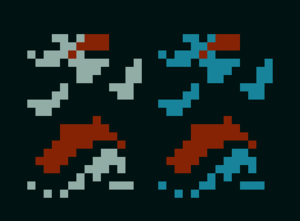 Fuming God-Child player (left) with You, but mechanical as their pet (right)

You, but mechanical is a pet, a companion to the player that can be selected during character creation, available exclusively to patrons of Freehold Games. They are, as their name implies, a mechanical version of the player themselves.

You, but mechanical uses the same tile as the player colored cyan, and their display name will be "mechanical [player's name]". However, many of their properties differ from the player: they will have different attributes, and they will not begin the game with any items, skills, mutations or cybernetics that the player starts with.

"You ever worry that you might get... swapped? With a robot?"

"Swapped? How do you mean?" Yybas stopped heaving straw to turn and glare at Mukas.

"With a robot, like." The farmhand fidgeted, his resolve faltering upon hearing himself speak the words aloud. "They build a robot s'just like you."

"Yer muddy, I know. Get yer muddy behind back ta work and stop worryin about robot impostors. Moon and Sun, what a fool you are."

Thus chastised, Mukas slunk from the barn with his shoulders sagging. Huffing a sigh, Yybas planted her pitchfork in the hay and stared after him. She waited until he was gone, until the only sound was the whirring from Yybas's chest.

She smirked, and resumed her task.

You, but mechanical's "opinions" include several references:

This information is reliable as of patch 2.0.201.72.
Retrieved from "https://wiki.cavesofqud.com/index.php?title=You,_but_mechanical&oldid=79581"
Categories: