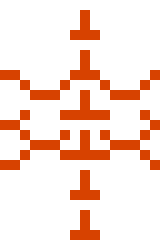 Potential is polarized into a scarlet hex mesh and keyed to its arranger. Objects are blocked unless they are molecularly whitelisted.

force projector. They are similar to

forcefields, differing in that they block all projectiles and can allow certain creatures through.

Grit Gate until they have completed the More Than a Willing Spirit quest, after which point the player will be able to walk through them.