From Caves of Qud Wiki
Jump to navigation Jump to search
This page describes slimy biomes, which cause zones they occur in to become slimy. For a more general usage of the term, see Slimy (disambiguation). 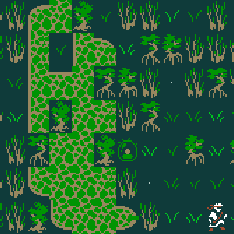 Example of a slimy jungle

A slimy biome is a biome that can occur in almost any location. It causes the zone it occurs in to to be covered in pools of

slime, and to be populated with varying amounts of

giant amoebas. Slimy biomes do not override existing biomes, instead coinciding with them.

The slime patch is the first intensity of the slimy biome.

scumgrass, and will have 1-2 giant amoebas somewhere in the zone.[1]

Zones that contain a slime patch will have "slimy" appended to the beginning of their names.[2]

The slime field is the second intensity of the slimy biome.

In addition to the pools of slime and patches of scumgrass, slime fields will contain 2-3 giant amoebas.[1]

Creatures encountered in a slime field have a 50% chance to be "slimewalkers",[3] allowing them to walk through slime (or any other slippery liquid) without slipping. It also prevents them from getting stuck in certain liquids, such as

asphalt. Such creatures are colored green and are web-toed if they have feet, or slimy-finned otherwise.[4]

Zones that contain a slime field will have "slime-drenched" appended to the beginning of their names.[2]

The slime bog is the third intensity of the slimy biome. Parasangs that contain slime bogs will be logged in the Journal under "Natural Features" when encountered for the first time.

In addition to the pools of slime and patches of scumgrass, slime bogs will contain 3-4 giant amoebas.[1]

Creatures encountered in a slime bog have a 50% chance to be "slime-spitters",[3] granting them the same effect as slimewalkers in addition to granting them the Liquid Spitter mutation.[5] This unique mutation, in this case, grants the creature the "Spit slime" ability, allowing them to shoot a projectile up to 8 tiles away that creates small pools of slime in an area where it lands.[6] Such creatures are colored bright green and are slime-spitting.

Slime bogs will also generate with a 1 dram pool of

cloning draught somewhere in the zone.[1] Because of the abundance of

slime and plants, the pool can sometimes interact with the environment if it is not found quickly. If it spawns under a plant, for example, it can stain the plant and produce a clone, using up the draught. If a creature or the player walks over the top of it, it can be used up or evaporate, also preventing it from being collected.

Zones that contain a slime bog will have "and slime bog" appended to the end of their names.[2]