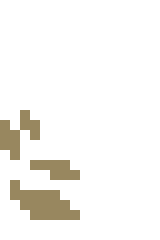 This enormous crab scuttles forth beneath a cavernous ivory shell large enough to house a man and a bedroll, and in fact Qud's subterranean hermits are known to take up residence in the flaking shells of dead king crabs.

Bethesda Susa, and the

Eyeless king crabs possess two mutations, Enhanced Skeleton and Kinetic Dampening, each at mutation level 12;[3] however, neither of them have any function.

When an eyeless king crab dies, it has a 25% chance to drop an

eyeless king crab corpse.[3] This corpse can be butchered to produce

The number of members are as follows. Members will be spawned in this order and placed in nearby cells until all members have been spawned, or there are no remaining valid tiles to place them in.[5]

All eyeless king crab heroes will possess the following:[7]

*Due to the fact that eyeless king crab's claw's occupy their pincer slots, they will not normally be able to equip this item.

This information is reliable as of patch 2.0.201.88.
Retrieved from "https://wiki.cavesofqud.com/index.php?title=Eyeless_king_crab&oldid=60170"
Categories: