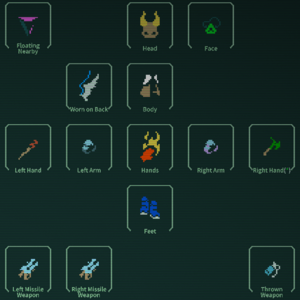 Weapons are offensive equipment in Caves of Qud. They are separated into categories, each with their own skill and specialization. That includes:

For most weapons, damage is determined using its penetration and damage values; see the article on penetration for details. A few weapons, such as flamethrowers and explosives, ignore these calculations.

Melee weapons are held in your normal hand slots and are used whenever you walk into an enemy, as well as for for melee skills. They are separated into four categories; generally, each has its own one-handed and two handed version.

Missile weapons must be fired with the fire command (default f), or by using a ranged weapon skill. They are separated into three categories. Ranged weapons are equipped in dedicated ranged weapon slots, allowing you to have both ranged and melee weapons ready at once.