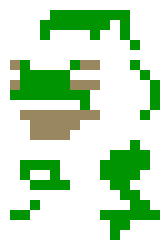 Though yet young, they have gathered wits beyond a hatchling's and now also gather tinsel trinkets to horde. By crushing polyps of coral in their mouth and rolling the bits in sticky spit, they craft gobbets of razor-sharp shrapnel to launch at those who threaten them.

Palladium Reef and commonly carry a variety of valuable equipment and consumables. In addition to their gear, they possess a natural spitting attack, )mouth of crushed polyps, which is comparable to a

light rail in penetration and damage. Despite their docile demeanor, they are likely to be hostile to the player due to low starting reputation with svardym.