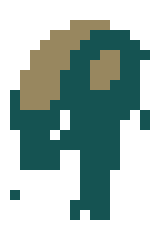 You nearly mistake it for a boulder, and then you spot a crease in their hide as they draw a slow, hibernative breath. Suddenly you understand the saying among pig farmers: always fear large rocks.

A slumberling is a creature belonging to the bears faction. Slumberlings can be found in

jungle tiles, as well as underground and in

Grit Gate, and the

When first encountered, slumberlings will usually be asleep, and will not act in any way whatsoever. Slumberlings will only awaken after being attacked, and will then retaliate. They will usually attack the creature who awoke them first, but tend to prioritize targeting the player over other hostiles.[3] Every turn a slumberling is awake, they have a 10% chance to fall back asleep, even if they are engaged in combat or are otherwise occupied with a task.[4]

When awake, slumberlings will attack in melee with their \claws, natural long blade weapons that each deal

This information is reliable as of patch 2.0.201.84.
Retrieved from "https://wiki.cavesofqud.com/index.php?title=Slumberling&oldid=60101"
Categories: