From Caves of Qud Wiki
Jump to navigation Jump to search
This information is reliable as of patch 2.0.201.64. If this is no longer the current patch, you can help by updating it.

The player may trade with NPCs in Caves of Qud. Trading is closely related to commerce, the base value of items. Most commonly, players will be trading with merchants.

The central currency in Qud is the dramUnit of liquid. A waterskin can hold 64. One dram of water is the base unit of currency., a small measure of drinking

water that must be stored in its own container. For clarity, in this page "$" represents drams in the commercial sense, while drams as the fluid volume is represented as "D".

Trading is initiated by selecting the relevant dialogue choice or pressing tab. Trading can performed by speaking to any character who

Traders benefit by taking significant profits, as commerce means they have a significantly greater selling prices than the player. The player benefits as any offer they make will succeed provided they can pay any owed drams and accept any drams they are owed. For example, a

scrap-clad hermit with only one item to trade will still provide the required payment if you offer him $20,000 of material, but only if you have the capacity to accept 20,000D. Note that NPCs, for the purposes of selling them goods, will have infinite water. The only limit to how many drams can be earned in one transaction is the total volume of liquid that the player can hold. 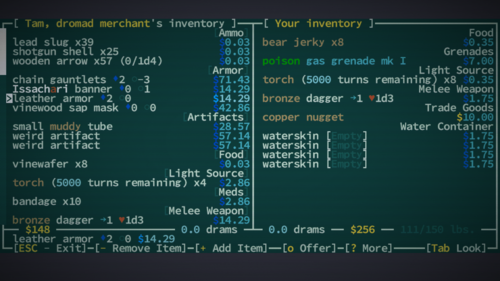 The trading screen is separated into two halves: the left half is the character the player is trading with, and the right half is the player's inventory. Here the player can offer to buy the NPC's wares off of them or attempt to offer up their own for

Caves of Qud has a bartering system where items vary in price based on a multitude of factors. Items do not have a "set" price like other similar games of the genre. Instead, items all have a commerce value. Commerce is the base value that is specified for each item that is then multiplied or divided by a multiplier depending on selling or buying.

This multiplier depends on the player's Ego modifier as well a few other factors, such as the Snake Oiler skill.

This section is an excerpt from Commerce#Trading Multiplier Formula.

If the player has Glotrot, Ego modifier and Snake oiler no longer have an effect and returns a flat -3. The equation then becomes

The central currency to the game is

fresh water, often simply referred to as their measurement dramUnit of liquid. A waterskin can hold 64. One dram of water is the base unit of currency.. 1D of water is universally valued at $1, and is used to pay any outstanding difference in transactions: if the player offers $32 of material for $35 of material they are required to throw in 3D to cover the outstanding $3 debt. Only fresh water is accepted as balancing currency: if the water is contaminated by any other liquids then it ceases to be counted as drams unless it can be purified.

It is important to note that dram exchange requires appropriate space:

Drams will not go into containers filled with anything but fresh water, as it will cease to be currency of the same value once mixed. Lacking space for owed credit or drams for owed debt will result in the transaction being rejected.

While exchange prices have three decimal places of accuracy, the amount paid will round to the nearest integer. In such cases the bias always favors the trader:

4 drams of any liquid weighs 1lb, so the weight of a filled container is the capacity divided by 4; an empty 64D water skin weighs 1lb but the same one filled will weigh 17lbs, as 64D / 4 = +16lbs. While an acceptable cost early on, drams will slowly start to eat into your carrying capacity as you find more liquid containers and start selling loot, so materials with higher guaranteed $/lb will eventually become necessary. It should be noted that it is still strongly advised that the player keep one or two water containers with space so that owed currency can still be easily managed between transactions.

Water is not the only liquid that can be traded; unlike drams, they cannot be automatically poured. Liquids other than fresh water must be sold with the container as added value, so the actual profit is (Drams * 1D Value) + (Sold Container Profit - Replacement Container Cost). For example, 64D of honey always sells for $128 ($2/D), but to sell it you first need to put it in a $3

Note that this table simply provides the minimum value for a container of the appropriate size, as factors like player trading stats cannot be accounted for. Liquids with a trading value of $0 are not listed such as

putrescence. Liquids also have varying weights, so their value per pound will depend.

Trade goods are effectively non-liquid (figuratively and literally) financial assets. While this does free up skins and can end up lighter overall, they can only be returned to $/D value by selling them to traders. This can cause issues in some cases, as high value items require you to either trade for a lot of items or be prepared to accept a lot of drams. Additionally, dormant items carried for value do not quench thirst nor can they provide additional uses like

lava. As such, it can be important to not convert all drams into trade goods.

There are also trade goods that do not keep their prices static across trades: